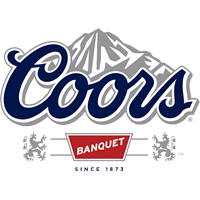 Coors, nicknamed the “Banquet Beer,” was first introduced by Adolph Coors 1873. According to legend, thirsty miners in the late 1800s threw celebratory banquets with Coors as the honorary beer because of its superior craftsmanship. Prior to its nationwide distribution in 1981, Coors built a cult following, with presidents, movie stars and many others making special trips out west to buy it. Coors is brewed in the Rockies for a uniquely crisp, clean and drinkable taste.